In the game the combats are based on step by step strategy.

A player controls his army that consists of at least 5 cards-units. A combat zone consists of six-sided blocks, on which every unit can walk at a definite distance.

In such a way the player’s task is to make a range of moves in order to carry out a combat as efficiently as it is possible, namely to gain a battle. 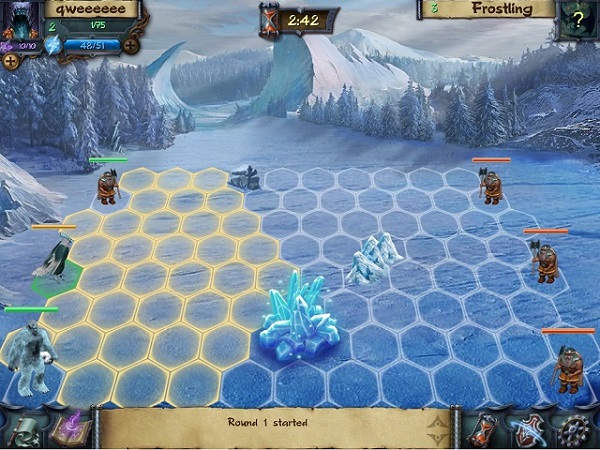 A certain amount of time is given for every move.

On the bottom of a screen there is a menu that has such options: to turn on/off a sound, to give up, to use a spells book, to read a log of a combat, to miss a move of a unit, to accomplish a move of a unit and also to open settings.

Every unit is unique and possesses certain abilities, it is necessary to take it into account in a combat. In order to find out what level of a unit your rival has you should point a mouse on it and press a left button, and a window with parameters of unit will appear. In order to look at parameters of an enemy it is necessary to click on its nickname at the right top.

Your character can use magic in a combat. Visibly a character is not represented in a form of unit at a combat zone, it is beyond the combat zone, controlling his army. In order to open the spells book, firstly, it should be your move and secondly, you should have enough energy.

In the spells book you will see not all kinds of magic, but only those, which requirements your character meets (a level, quantity of energy).

Combining a use of magic and a combat-wise tactics you will win the combat.